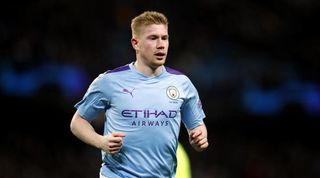 Kevin De Bruyne says he is happy at Manchester City and has no plans to leave the club.

The Belgium international is currently in his fifth season at the Etihad Stadium, having joined City from Wolfsburg for £55m in summer 2015.

De Bruyne has been linked with Real Madrid and Barcelona in recent months, but he still has three-and-a-half years remaining on his contract in Manchester.

And the attacking midfielder says he feels "comfortable" and "relaxed" at City.

“I feel comfortable because this is the club I have played for the longest apart from Genk, but that was because I was in the youths, so that was different,” he told Sport360.

“If one of these things wasn’t in place it would give you stress, but I don’t have that stress at the moment. I feel relaxed and feel I can focus on what I need to do to be ready.”

City have little chance of winning a third consecutive Premier League title this term, with Liverpool currently 22 points ahead of the reigning champions.

Pep Guardiola's side are now expected to turn their attention to the Champions League, where they will face Real Madrid in the round of 16.

De Bruyne has been likened to Zinedine Zidane, the Madrid manager who was previously among the best players of his generation, but the City star sought to play down those comparisons.

“I don’t know about that,” he added. “It’s nice when people say this kind of [positive] stuff. It means I am doing good – and that’s about it.”

City can move to within 19 points of Liverpool with victory over West Ham on Sunday.