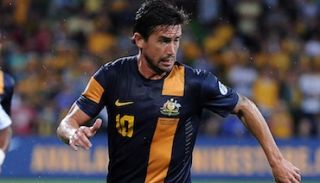 The 34-year-old, Australia's best-known footballer, was released by Qatar's Al Gharafa last month at the end of the season after scoring one goal in four games.

Kewell had signed a one-year deal with Heart for the 2013/14 season, the club said on Wednesday, having previously played a year with cross-town rivals Melbourne Victory in 2011/12.

"I have been in regular contact with Harry over the past few months and have been so struck and impressed by his hunger," Heart coach John Aloisi, a former Australia team-mate of Kewell, said on the team's website.

"I watched Harry's progress in the Middle East very closely and it's clear that physically he is in great condition so we are confident that, with a big pre-season, he will be flying by round one."

Kewell, who still harbours ambitions of a return to the international arena with the Socceroos, left Victory after one season last year to return to Britain for family reasons.

"It's always been my intention to come back and play in the A-League," Kewell said. "John Aloisi and I have known each other a long time and we have played together, so I'm thrilled to be part of Melbourne Heart at an exciting time."

Kewell's first A-League stint was a huge boost for the fledgling competition and followed a successful three-season spell with Turkish giants Galatasaray.

He played for the Socceroos at the 2006 and 2010 World Cups, but has lacked regular football over the past year and has been overlooked by coach Holger Osieck in Australia's current qualifying campaign for next year's finals in Brazil.

Kewell, who left Australia for England when he was 15 and is married to an English actress, was Australia's first genuine world class football talent.