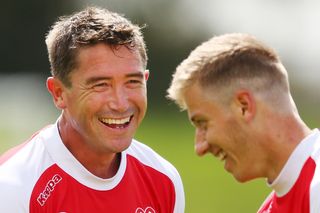 As he prepares to wear the Heart captain's armband for the first time at Etihad Stadium, Kewell is convinced he can make an immediate impact on his A-League return.

"I don't think there's going to be friendly banter, I think it's going to be fiery and I think that's what everyone is looking forward to," Kewell said.

"Sometimes a little brother steps up and knocks that killer punch."

The former Leeds United, Liverpool and Galatasaray man admits he failed to fire for Victory early in the 2011-12 season, though he improved late in that campaign, before quitting the club.

The 35-year-old has played just three club games for Qatar club Al-Gharafa since, but has benefitted from an extended pre-season at Heart - having arrived 71 days earlier than his last stint in the Victorian capital.

"Yes I agree, as long as the season (with Victory) went on I felt I got fitter and sharper," Kewell said.

"But this season that's why I decided to come out here early, to get a good pre-season under me so hopefully I can be ready for the start of the season."

Heart coach John Aloisi agreed that a near three-month pre-season had Kewell primed for the derby in front of what could be a sell-out crowd.

"He wasn't totally happy with how he performed when he was at Victory, so we decided to get him here early," Aloisi said.

"He wanted to come early, get fit, and since then he's been such a positive influence ... Harry's ability will shine through if he's fit.

"We're getting him fit and he's fit to play tomorrow."