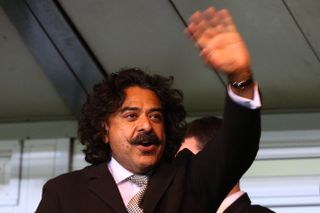 The London side - who finished 12th in the Premier League last season - made a poor start this time round, with four losses already from their opening eight matches.

But they have at least managed to reverse that trend in recent weeks, with a 1-0 win over Stoke before the international break followed up by victory at Palace, via two wonder goals from Pajtim Kasami and Steve Sidwell.

That has left Khan - who bought the club in July - hopeful that the pieces are finally starting to fit into place.

"I think, and have believed this for quite some time, that we have great players and some of those are new to Fulham and some of them have been here for a while," he told Sky Sports News.

"It was a break-out moment (against Palace) and I hope this now continues."

The businessman also reaffirmed that manager Martin Jol has his full backing, despite the club's shaky start.

"You have to keep in mind he is a very experienced guy and the start we have had, whether you're Martin Jol or any Fulham supporter, you're not happy and we can do better, and our players are a lot more talented and they proved that on Monday night."