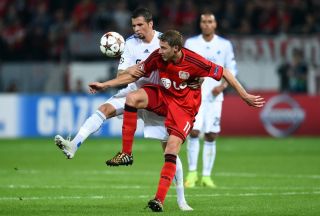 Leverkusen routed Danish opponents FC Copenhagen 4-0 at the BayArena on Wednesday, a result that saw the Bundesliga side progress 7-2 on aggregate over two play-off legs.

Hosts Leverkusen were at their free-flowing best, scoring two goals inside the opening seven minutes through Son Heung-min and Hakan Calhanoglu.

Kiessling added a third from the penalty spot in the 31st minute before the German striker completed his brace 24 minutes from the end as Leverkusen secured their place in the Champions League for a third consecutive season.

"I think we can be very satisfied, all in all," Kiessling said. "We got another early goal and implemented our pressing strategy again and took a deserved 3-0 lead at half-time.

"We couldn't quite keep up that pace, we calmed it down a bit, but all in all we can be very happy."

Kiessling added: "We're not going to score early goals all the time but tonight it was important to lay down a marker early on.

"The quick goals did wonders for our confidence and we had a spring in our step from there on in.

"We're sure to have some setbacks along the way but we're learning all the time and the wins and points we've earned over the past few games are something we can take forward."

"We're happy that we made it. Play-off matches are always difficult. If you don't qualify, a dark shadow looms over the whole season," he said.

"When you do, with a focused team who dominate both matches, you feel good. This game was characterised by our determination to decide the tie as fast as possible.

"We did that in the first half; I compliment my team."