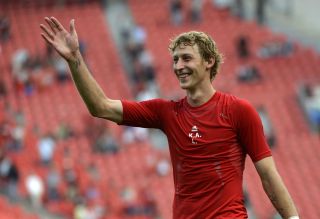 The Bayer Leverkusen forward has been regularly overlooked by national coach Joachim Low, last appearing for his country in the third-place play-off at the FIFA World Cup 2010.

That despite him racking up 50 Bundesliga goals in the three seasons since - including two from his first three appearances of the current campaign.

An article in German newspaper Bild claimed that the former Nuremburg striker would refuse to be called up by Low in the future, but he has moved to deny those reports.

"It is not easy for me to get asked and asked again about the national team. I would like to take off the pressure, so that this subject doesn't come up again and again.

"For me the situation is fine, when they say they won't count on me. So I can concentrate 100 per cent on Bayer.

"Hope you can understand me, because it preoccupies my mind a lot and I want to bring it to an end.

"Since three years there has never been any contact or any conversation why it is not enough for the national team. I am not someone who stirs things up, but I would like to leave this subject now.

"At Bayer I have you, the fans and the surrounding, which gives me trust. That's all I need to reach my full potential."