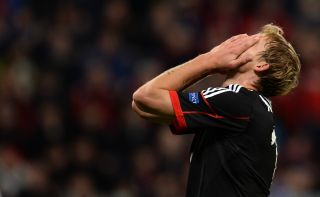 With Miroslav Klose and Mario Gomez both injured, last season's top goalscorer in the Bundesliga had been tipped for his first call-up since 2010.

However, Max Kruse of Borussia Monchengladbach is the sole striker in Low's party for the Group C games against the Republic of Ireland and Sweden, with Hoffenheim's Kevin Volland also missing out.

Hamburg's Marcell Jansen replaces injured Borussia Dortmund defender Marcel Schmelzer while Mario Gotze and Marco Reus are in line to feature against Ireland in Cologne having missed the 3-0 win over the Faroe Islands with injury and illness respectively.

Midfielder Lars Bender also returns after missing Germany's last two qualifiers with a hip injury while Bastian Schweinsteiger is involved too, having been absent from the last squad with an ankle problem.

A win against Ireland would guarantee Low's men their place in the World Cup.