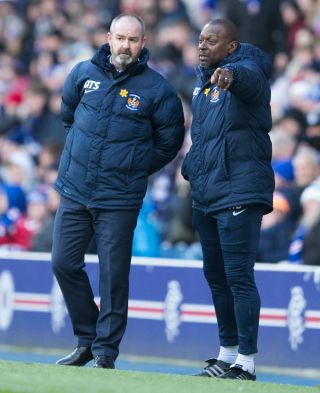 Steve Clarke would find it hard to turn down the Scotland job if he was offered it, according to his Kilmarnock assistant Alex Dyer.

The Rugby Park boss is vying with Aberdeen manager Derek McInnes and Scotland Under-21 coach Scot Gemmill for the Hampden hot seat, with Scottish Football Association bosses set to make their decision early next week.

And Dyer believes Clarke will struggle to say no to the national team, saying: “I know Steve’s ability, I know he’s a good manager. A very good manager.

“If the country comes for him then it will a great honour and I know he knows that.

“He’s done a great job here. He’s always left it open that he will he decide at the end of the season. That’s no secret.

“At the end of the day, it’s a hard one to turn down. It’s the pinnacle of every manager’s career.

“We’ll just leave it up to the gaffer and what will be will be.”

SFA chief executive Ian Maxwell is willing to wait for Killie and Aberdeen to settle their battle for third place and a European slot before making his move.

Clarke’s side host Rangers on Sunday, while the Dons head to Hibernian as the curtain comes down on the Ladbrokes Premiership campaign.

But Dyer insists the mounting speculation over Clarke’s chances of landing the Scotland job have not disrupted preparations as Kilmarnock look to secure their highest league finish since 1966.

“Steve copes fine,” Dyer said. “His mindset is to prepare for Rangers. What will be will be.

“It’s not the first time there has been speculation. He’s had it all season because of the job he’s done here.

“He’s ready and looking forward to the weekend. It’s a good game to finish the season.”

Clarke inherited a side looking destined for a relegation scrap when he took over from Lee Clark in October 2017.

But Killie have not looked back since the former West Brom and Reading boss’ appointment and are on course for their first European adventure in 17 years so long as they match Aberdeen’s result at Easter Road.

If Clarke does decide to depart, Dyer admits the manager will leave with a heavy heart but satisfied he has restored the club to solid foundations.

He said: “I think it would be a wrench for him to leave. He’s been here for two years and had two great seasons.

“The club has come on big strides. We’ve been blessed to have a good squad with good professionals.

“So what he’s achieved here with the budget he has had is unbelievable.

“If he goes, then whoever takes the job next will have big shoes to fill. But if whoever comes in works hard, then the club will be fine.

“We’ve surpassed everything we went out to do this season. We wanted to get into the top six, which we have. We wanted to pass last season’s points tally and now if we can get into Europe, that’s just a bonus.

“When we walk round, people come up to us to tell us what a good job we’ve done. It’s a nice feeling.

“Rangers are a good side. They’ve won six in a row and will want to keep that run going on Sunday. We want to finish third so we can’t worry about what Aberdeen do at Hibs.

“The result will be what it is and it will take us where it takes us.”