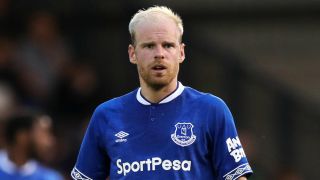 Davy Klaassen has brought a disappointing 12-month spell at Everton to an end after joining Bundesliga side Werder Bremen.

The 25-year-old cost Everton in the region of £24million in July 2017 but he struggled to break into the first team at Goodison Park, making just three Premier League starts as the club went through a succession of managerial changes.

Ronald Koeman, who signed Klaassen, was sacked three months after the midfielder's arrival and successor Sam Allardyce opted not to utilise the Netherlands international.

The midfielder has now completed a move to Werder, who are said to have paid Everton close to £12m.

Werder coach Florian Kohfeldt said he had been tracking Klaassen for some time, telling the club's official website: "We have been watching him for a long time and are glad that this opportunity has opened up.

"With his strategic sense, Davy is able to set a rhythm for the game, impresses with his creativity and is strong and aggressive at the same time."

Klaassen's career began at Ajax, where he won three Eredivisie titles and captained the Amsterdam side in the 2017 Europa League final, in which they were beaten by Manchester United.

He said the strength of Werder's desire to sign him made the club an obvious choice of destination.

"Werder made intensive efforts," he said. "It was important to me to know exactly where the journey was going on the pitch. The ambitions of the club have convinced me.

"After my exchange with Florian Kohfeldt, I have a very good feeling that I can make an important contribution here with my abilities.

"The coach wants to play attractive, offensive football. I am really looking forward to this."