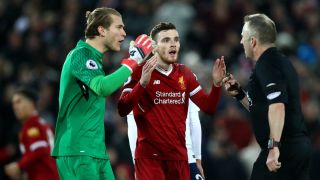 An angry Jurgen Klopp declined to speak his mind about referee Jon Moss after Tottenham were awarded two controversial penalties in a 2-2 Premier League draw at Liverpool on Sunday.

Klopp's men twice led thanks to goals from Mohamed Salah, only for a Victor Wanyama wonderstrike and Harry Kane's stoppage-time spot-kick to earn the visitors a point from an entertaining clash.

Moss gave Spurs two penalties after long consultations with his assistant, with Loris Karius first denying Kane after the goalkeeper was adjudged to have brought the striker down, Liverpool protesting there was an offside in the build-up.

But after Salah's 91st-minute solo strike restored Liverpool's advantage, Kane converted from 12 yards to reach 100 goals in the Premier League, Moss having given a penalty for Virgil van Dijk's challenge on Erik Lamela.

Klopp told Sky Sports in a post-match interview that Moss had accepted responsibility for the first penalty being incorrect, but the German was unwilling to offer more criticism of the official for fear of being fined.

"It was a very intense game. There were a lot of kicks not given and then the softest kick earns a penalty," Klopp said at a news conference.

"I heard Lamela was offside as well and runs into Van Dijk. He was already on the way down. The referee was saying play on and the linesman decided otherwise. For the first penalty, Kane was offside. My defence put him offside, it was good defending.

"I am angry but obviously I cannot change it now. What is my job now? To create headlines? If I say what I think I would get the biggest fine in world football.

"In the 93rd minute you whistle a penalty when you are 100 per cent sure. If it is clear that the opposite side wants to go down, then cool down. We have to accept it. We cannot change it. The linesman was sure. I cannot blame Jon Moss. If someone tells you they are sure you believe them."

We didn't deserve that! Great effort from the boys they deserved all three points! February 4, 2018

Liverpool had been battered 4-1 at Wembley in the reverse fixture against Spurs in October, with Dejan Lovren withdrawn before half-time after a disastrous individual performance in trying to cope with Kane.

"In the first game they deserved it, but in this game we deserved [to win]," Klopp added.

"But life does not always work as you want it. In the first half they were lucky in moments that we didn't score."

First the fantastic leading goal by then the unlucky penalty call in the last minute. This time unfortunate - next time more lucky. Massive support by the fans February 4, 2018

Penalty controversy stole the headlines, but Salah made history with an early opener, becoming the fastest Liverpool player to reach 20 Premier League goals, taking just 25 appearances to do so and beating Luis Suarez, Fernando Torres, Michael Owen and other club icons to the milestone.

"It was a fantastic goal, an outstanding goal," Klopp said of Salah's mazy run and powerful finish. "It was an outstanding performance, [he was] a threat the whole 90 minutes, that's true.

"I saw now when I passed a [TV] screen, I saw the stats and it looks like Tottenham had the ball all of the time, but we had them really a lot in their own half and we let them play. First half, we were much higher.

"We played fantastic high pressure, it was unbelievably good, we created moments, we created chances. We had the cross from Trent [Alexander-Arnold] and the header from Roberto Firmino - you would not count it as a chance, it was not a shot on target, but situations like that, we had a few.

"We had the last situation of the first half when Mo unfortunately passed the ball as little bit too hard for Sadio [Mane], otherwise it would've been a chance. We had Sadio in a perfect position but he didn't find the player.

"So Mo, to go back to your question, he scored both goals [and] the first one was so cool, to get the ball there and with or without a goalkeeper, it makes no difference - that's how it looked.

"And the second one was outstanding, but it's really difficult to defend because I think everybody in the stadium, his team-mates included, thought he would play a pass and in the end he did it by himself – that was probably in this moment the best idea."