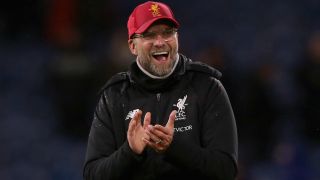 Coutinho made a €160million move to Barcelona earlier this month in a blow to Klopp's side.

But Klopp said Liverpool would be in no rush to replace the Brazil international, with his focus on finding the right player.

"Obviously we don't hesitate to spend the money, we did a few times, but it is not about the moment, it is about making the right decision.

"I really think, it is not that Adam Lallana is a replacement for Philippe Coutinho but he is back. Cool. It is another wonderful, creative, offensive midfield player. Does he have the same free-kick as Philippe Coutinho? No, but there are a lot of things he can do. He can make us stronger in these situations.

"And there are other players who can stand up. [Alex] Oxlade-Chamberlain was here all the time with Phil together but he can do a job, Milly [James Milner] still, Gini [Wijnaldum], so they are all here and can make an improvement and develop in the season so that is all good."

Liverpool are fourth in the Premier League ahead of visiting Swansea City Monday.

Klopp said he had no plans to simply sign a player to show potential critics his team had replaced Coutinho.

"If anything obviously right would be there in the window then nobody would not do it and we say, 'OK, let’s go for it' but it is not about doing something to cool the situation down or show the people we don't sleep," the German said.

"It is only about right or wrong and at this moment in this situation it is right."