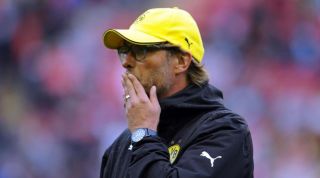 Last season's runners-up found themselves behind to Roger Schmidt's side after just nine seconds as Karim Bellarabi found the net with the fastest goal in Bundesliga history.

Schmidt, who was taking charge of his first German top-flight match, saw his side pose a serious threat on the counter and they produced a resolute display in defence.

Dortmund rarely tested Bernd Leno in the Leverkusen goal and Stefan Kiessling made sure of the win in second-half stoppage time, but Klopp acknowledged that Bellarabi's early goal was a real blow.

"The start to the game hurt, of course," Klopp told reporters. "Leverkusen used their plan, we unfortunately did not.

"We have a lot of work to do. That we were not awake at the beginning I blame on myself.

"Our feeling in the first 25 minutes was influenced dramatically after the early goal.

"The team has shown extreme will. If we took a chance, then we would have turned the game. Bayer earned their win."

Klopp also rued his team's inability to do better in front of goal, but was quick to remind his players that everyone is responsible for the defeat.

"In the situations on goal, we can do everything differently," he added.

"It was obviously bad, but the guys have not screwed up alone [it was a collective defeat]."