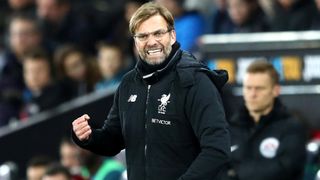 Liverpool manager Jurgen Klopp believes a top-four finish in the Premier League should be considered a successful season for the club.

Klopp's side sit third in the table with 13 games remaining, although fifth-placed Tottenham – their opponents Sunday – are just two points adrift.

With Manchester City well clear at the top, Liverpool's only chance of winning a trophy this campaign shapes as the Champions League, in which they face Porto in the last 16.

Klopp said if his team managed a top-four finish, that should be enough for their season to be considered a success.

"When you start a season you can dream of something and you have to make a realistic target as well," the German told UK newspapers.

"I think being champion is probably the dream – not only at Liverpool but especially at Liverpool – but because of the season City is playing that is quite difficult.

"If you cannot be first then I would prefer to be second but if you are second, third or fourth at the end of the season all three positions are good and similarly difficult to reach.

"Everybody thinks Arsenal are away but they are not. If there is one matchday when one of us loses and Arsenal win then they are five points [behind] and off they go. Tottenham is in the group with all of us for the Champions League positions at the moment so for sure it [a top-four finish] would be a success."