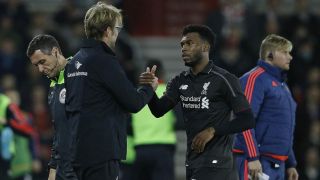 Jurgen Klopp has confirmed that Daniel Sturridge and Jordan Henderson are set to sit out the League Cup semi-final clash with Stoke City on Tuesday.

The England international recently stated on Twitter that he was fully fit after suffering a hamstring injury a month ago, but the Liverpool manager left him out of the squad for the weekend's defeat to West Ham.

Klopp has now revealed that Sturridge remains short of complete match fitness and will not be risked for the trip to the Britannia Stadium, telling a media conference: "Daniel has had some little problems.

"When he's had a row of training sessions, I will pick him. He's not available."

The former Borussia Dortmund boss is also keen to be patient on captain Henderson's return from a heel injury.

"We have to wait. What's happened with the tendon is painful. There is blood around heel. We can't rush it."

Klopp was angry with Liverpool's display in the 2-0 loss against West Ham and has demanded a reaction from his players as they look to reach the League Cup final.

He has also made it clear that steps have been taken to address his side's defensive concerns when it comes to crosses and set-pieces.

"You have to react to defeats in the right way," he said. "On Saturday we were passive. That's not good in life or in football. We have to be more aggressive.

"This cup is important. We have to go for it. Our target is to win it. It will be a tough game because Mark Hughes has done a brilliant job.

"We have issues with crosses. Before that we had issues with set-pieces. We need to solve that. We've been clear with the words."

Stoke's strong recent form has been inspired in part by Marko Arnautovic, who has scored four goals in his last six Premier League appearances.

"Arnautovic was young player in Germany who had some problems but he has a big talent. He's scoring goals, making runs behind lines," Klopp said of the former Werder Bremen forward.

"He's more of a false number nine but one of the most important things in football is stopping crosses."