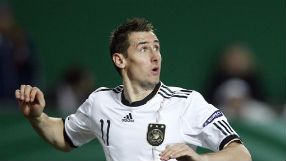 The 32-year-old struck in the third and 88th minute of Germany's 4-0 win which put them eight points clear in Euro 2012 qualifying Group A with a maximum 15 points.

Klose took his goal tally to 61 from 107 internationals, seven behind Muller, underlining his importance to the national team. "As long as he keeps scoring, he will be playing for us," Germany coach Joachim Low said.

Low has stuck with Klose in the qualifying campaign after their third-place finish at the World Cup despite a superb season by fellow Bayern striker Mario Gomez, the Bundesliga's top scorer with 19 goals.

The striker has justified Low's faith and has now scored in six consecutive internationals.

"There are younger players now coming up and I am just happy to keep up with them," Klose told reporters, 10 years almost to the day since his first appearance and goal for Germany.

"Now that I have reached this stage I want to break that (Muller) record. I have talked to Gerd and he said he will not get angry."

Klose, who has scored just once in the Bundesliga this season after falling out of favour with Bayern coach Louis van Gaal, already has six goals in Germany's qualifying games.

He will also become the country's second most capped player alongside Jurgen Klinsmann if he plays in their friendly against Australia on Tuesday.

"I am happy that Mario Gomez is scoring goals. But Miroslav Klose has been outstanding in the past years. Miro wants to continue at this level," said Low.