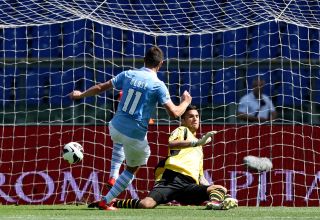 The 35-year-old has been with the Rome club since 2011 but, despite having faced the Serie A champions seven times in his career, he is yet to net against Juve.

However, he will have another chance when the teams face each other in Rome on Sunday, though their opponents will be out for revenge after Lazio edged them in the Coppa Italia semi-finals last season.

And while Sergio Floccari was the star of that show, heading home in stoppage time to earn the Romans a place in the final, Klose will hope for the spotlight to be on him at Stadio Olimpico on Sunday.

"I am sure that sooner or later I will score a goal against Juve. Hopefully it will happen (on Sunday)," he said.

"Besides, I am not the only person who can score goals. Our midfield is full of attacking players like Antonio Candreva and Senad Lulic. I hope to score even more this year, although I am also happy to provide assists.

"It is fundamental to play as a unit both when attacking and defending."

The Germany international has been prolific in front of goal for the Serie A side since joining from Bayern Munich, scoring 27 goals in 56 league appearances.