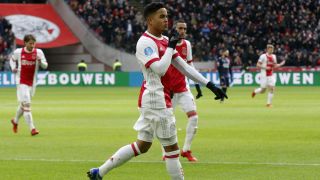 Patrick Kluivert has told son Justin to "follow his heart" when it comes to deciding his future beyond Ajax.

Clubs including Manchester United, Barcelona and Real Madrid have all been linked with the 18-year-old forward, who has established himself as one of the brightest young stars in the Eredivisie.

His father, who shone at Ajax before enjoying spells with the likes of AC Milan and Barca, expects the youngster to stay in Amsterdam for another year to continue his development.

When it comes to his long-term future, he says Justin should ignore the prospect of financial gain and join a team that best suit his strengths.

"Justin is doing very well," he told Cadena Ser. "I hope he continues like that, with his feet on the ground. I'm happy for him for how he's dealing with everything.

"He has to play another year at Ajax to keep growing physically and mentally. He has to be calm. He feels good and with confidence. If his head is in a good place, his moment will come and he will chose.

"It's difficult to say no to Barca but also to other teams. He's 18. The most important thing is that you choose with your heart and a team that best suits your game.

"Not the one who pays more, the one that plays your style of play. That's the most important thing."

United are one of the teams to be most heavily linked with a move for Kluivert Jr, despite manager Jose Mourinho's insistence he does not plan to sign another forward this year, but  father believes LaLiga would be a better move.

Justin Kluivert admitted recently there are four teams in England who would interest him, while he stressed he would not rule out joining Madrid despite his father's allegiance to Barca.

"England appeals to me," he told Helden. "Arsenal, Tottenham, Chelsea or Manchester United are nice clubs where I can see myself playing in a few years. If you get a nice offer, you never know.

"Everywhere I go abroad, they know my father, and I'm often asked: 'Come to Barcelona, I'll give you a tour of Camp Nou'.

"Barcelona is in my heart, but who am I to say no to Real Madrid?"