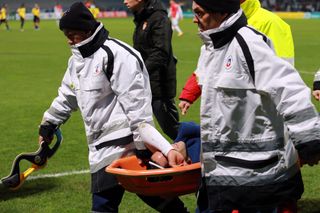 The Colombia international was carried off in the first half of Monaco's 3-0 Coupe de France win at Monts d'Or Azergues on Wednesday.

The club confirmed on Thursday that their record signing will undergo surgery after scans revealed he had damaged the anterior cruciate in his left knee and the 27-year-old's World Cup dream appears to be over.

A statement on Monaco's official website said: "Following Wednesday's injury, Radamel Falcao made a diagnostic examination. It appears that the player is suffering from trauma in the left knee with lesion of ligament anterior cruciate.

"The player will have surgery in next few days.

"Doctors will do everything possible to speed up recovery."

"Several times before the injury to Radamel, I spoke to the fourth official that the match was starting to get very physical and that it was getting dangerous for the players.

"Nobody listened and, not for the first time, we paid the consequences. It's a real shame for French football, the players that play attractive, attacking football don't get enough protection from the referees."

Falcao joined the wealthy Ligue 1 club from Atletico Madrid in May for a fee reported to be in the region of €60 million.

The prolific frontman has scored 11 goals in all competitions for Ranieri's side and will be sorely missed.

Monaco are five points behind leaders Paris Saint-Germain in the race for the Ligue 1 title and Falcao's injury is a major blow to their hopes of winning silverware this season.

He was also set to be one to watch at the World Cup in Brazil later this year after playing a major role in Colombia's progression to the finals.

Falcao scored nine goals for his country in qualification to further cement his billing as one of the best strikers in world football.