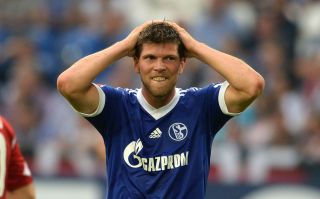 The Schalke striker has been out of action since damaging ligaments in his knee in a 4-0 defeat away at Wolfsburg in August.

Head coach Jens Keller had been hopeful of the Netherlands international returning to Bundesliga action after the international break, but a training ground incident on Monday saw Huntelaar suffer a setback in his recovery.

Keller subsequently ruled the 30-year-old out until at least 2014 regardless of whether he opted to have surgery or not.

But Huntelaar has now confirmed he will have an operation to correct the issue.

"It's been difficult, but I've decided to undergo surgery," he wrote on Twitter.

"Recovery time will be three to four months. It's tough, but a necessary step."

Before being struck by the injury, Huntelaar had netted three times in as many games for the German outfit this season.