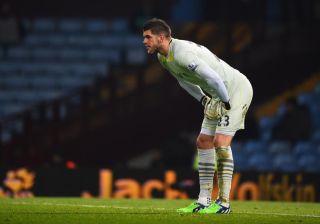 Forster came well out of his area to clear a long Ciaran Clark pass, but Gabriel Agbonlahor got there first before rounding the shot-stopper and opening the scoring at Villa Park.

Nathaniel Clyne's fine finish from a Ryan Bertrand cutback in the 81st minute salvaged a point for the visitors.

Koeman backed Forster and said the 26-year-old's indecision cost him.

"That's not usually a goal against us. I think it was a misunderstanding," Koeman told a news conference.

"I have to watch it back but from the bench I saw first his reaction was to come out, he stopped, and if you stop then you are too late. But he's clever enough to understand that kind of mistake.

"He's a great goalkeeper and that didn't change after this mistake."

"It was difficult for us to create opportunities," he said.

"Finally, we deserved the goal and I think we had the patience in the second half.

"We kept the organisation in the team after at half-time we said, 'OK, we know they'll be defending, keep the organisation' because we always score. It was late, but it was well deserved."