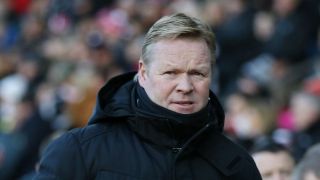 Ronald Koeman believes Southampton are back to their fluent best after watching them defeat West Brom 3-0 in the Premier League on Saturday.

Two first-half goals from James Ward-Prowse set them on their way at St Mary's before substitute Dusan Tadic sealed the victory 18 minutes from time, Southampton - who had new signing Charlie Austin watching in the stands - recording back-to-back wins for the first time since November.

Sadio Mane and Shane Long wasted chances to give the Saints an emphatic win, but it mattered little to Koeman, who had seen enough to know his side are growing in confidence.

"James Ward-Prowse's early free-kick opened the game," he told BBC Sport. "It gave us confidence, [and] meant we could control the game. We totally deserved the win.

"It's important to score early against a side like West Brom, as it gives you the patience to try and score the second. At 1-0, we could control the game, and be more patient.

"Now we are back playing our own way, how we like to play.

"Everyone looked very comfortable - that's the most important thing. The players looked more confident than they have done recently."

And the Dutchman was delighted to see Ward-Prowse's hard work on the training ground finally pay off, the 21-year-old taking his league tally to three after an impressive display.

Koeman added: "Ward-Prowse has practiced free-kicks a lot, and I told him to keep working on them - it came off."