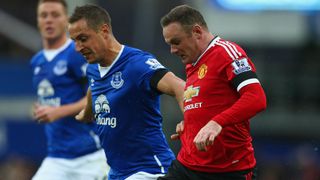 Everton manager Ronald Koeman does not have a "big problem" with Phil Jagielka's involvement in Wayne Rooney's now-infamous drinking session while on England duty last weekend.

Jagielka was photographed with Rooney, who allegedly ended up drunk at a wedding party staged at England's team hotel, 24 hours after Gareth Southgate's side beat Scotland 3-0 in a World Cup qualifier last Friday.

The Manchester United and England captain subsequently apologised for his conduct, which has remained a source of widespread debate, with Jose Mourinho reportedly angered after learning members of England's backroom staff were also at the party.

His Everton counterpart Koeman certainly did not share that tone when discussing the incident ahead of his side's Premier League encounter with struggling Swansea City on Saturday.

"In the case of Rooney it's not my problem, he’s not my player," he said.

"It wasn't a big problem for me with Phil. He had a drink after the match but the behaviour of Phil was not that bad.

"Social media is dangerous, you need to be an example for young people.

"I spoke to Phil but that is between him and I. Don't make that story too big."

Koeman was also forthcoming on other issues concerning Manchester United, notably his interest in Memphis Depay.

The Netherlands international has failed to establish himself as a first-team fixture under Mourinho and Koeman maintained he is keeping an eye on his compatriot.

"I was interested at Southampton, that has not changed," he added.

"We have to be patient but we will do business in January."