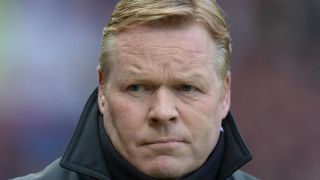 Southampton manager Ronald Koeman has angrily dismissed talk he is keen to take over at Chelsea as "bulls***".

But Koeman was forced to answer questions on his future after telling Radio 538 in his native Netherlands he hoped Chelsea manager Guus Hiddink - on a contract until the end of the season - could put in a good word for him.

However, in his post-match media conference, Koeman said: "That's always the problem if you do something in Dutch. Maybe they have some difficulties to translate it in the right way.

"It's all bull and you write what you want – you can't win against them so that's the reason that I don't react against that.

"Everyone knows I am very happy at Southampton, with still one year left on my contract. I will continue in Southampton and what will happen in the future, nobody knows.

"But I don't go again in that discussion because that's bulls***."