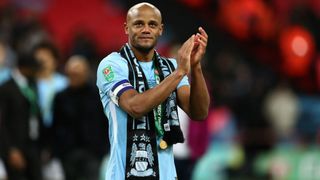 Vincent Kompany predicts Thursday's Premier League clash with Arsenal will be Manchester City's toughest of the season because they will be facing a "wounded animal".

City defeated the Gunners with minimal fuss on Sunday to lift the EFL Cup, with Kompany, Sergio Aguero and David Silva getting the goals in a 3-0 win.

Arsenal came under heavy criticism for their performance, particularly from television pundits Thierry Henry and Gary Neville, the latter accusing them of giving up and being "spineless".

The teams face each other again on Thursday, this time at Emirates Stadium in the Premier League, and Kompany says City need to be prepared for a real scrap if they want to go 16 points clear of second-placed Manchester United again.

"My opinion is simple," Kompany said. "I think it's going to be the hardest game of the season

"If my experience counts for anything - you will play a wounded animal, with a lot of quality in the team.

"At the same time, we are going to do everything we can to still be relentless.

"But my experience is that when you win a trophy there is always that 10 per cent you lose in focus or sharpness, just because you've gone through all the emotion of winning something. It's our role to fight it and be prepared for the game."

Victory at Arsenal will take City one step closer to a seemingly inevitable Premier League title triumph and Kompany is adamant Pep Guardiola's work last season - although criticised at the time – laid the foundation for their brilliant 2017-18 campaign.

Kompany said: "There's no doubt in my mind that Pep deserves more than he's even attributed to at the moment for how we've developed as a team.

"It's entirely his vision, entirely his work and we have the responsibility to bring it across on the pitch which is obviously not nothing.

"There's a lot of leadership that's helped us to get this far. Last season is something that I will always argue about because I don't think we had a bad season. A lot of what we've done this season has been developed out of what we did last season.

"We were getting punished in many ways, like what happened against Wigan [Athletic] in the FA Cup, where they had one chance and scored and we had plenty of chances we missed.

"That happened throughout the season last season and that's been the difference with this season, where we've scored last-minute goals and the players have raised their individual performance levels. I was never worried because with good players these things eventually become good."