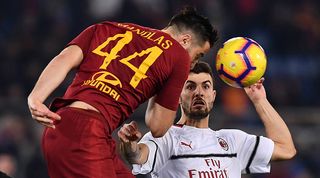 Manchester United will face competition from other top European clubs in their bid to bring AntoineGriezmann to Old Trafford, the Daily Mirror says. The release clause for the Atletico Madrid World Cup winner will fall £70 million over the summer according to the paper.

Meanwhile, the Red Devils and Arsenal will do battle to bring in KostasManolas over the summer, the Daily Mirror reports. The paper says the Greek defender could leave for £31m if Roma fail to secure qualification to the Champions League.

DenisSuarez will head back to Barcelona at the end of his loan deal, the Sun reports. Suarez has been at Arsenal since January but has struggled to adapt to the pace of the Premier League.

Liverpool’s LorisKarius wants to return to the Anfield club part way through a two-year loan at Besiktas, the Liverpool Echo says.

FilipBenkovic will return to play under Brendan Rodgers at Leicester next season, the Leicester Mercury says. The Croatian defender has been on loan at Celtic, where Rodgers used to manage, but the new boss expects him to return to the King Power.

Alexis Sanchez reveals he was a Man United fan growing up – and refuses to give up at Old Trafford https://t.co/YMO76Dk2gdpic.twitter.com/w0ZZRtJMZA— The Sun Football  (@TheSunFootball) March 19, 2019

Paulo Dybala: Liverpool are said to be ready to sign the Argentine from Juventus in the coming weeks, Tutto Mercato says.

Erkan Eyibil: Dubbed the new Mesut Ozil, the 17-year-old has caught the eye of West Ham and Newcastle, according to Turkish Football.

Olivier Giroud: The Frenchman’s salary demands could put Marseille and Lyon off a move for the 32-year-old, Le10Sport reports.