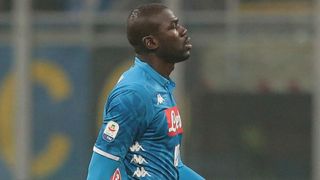 Napoli head coach Carlo Ancelotti has alleged that defender Kalidou Koulibaly suffered racial abuse from the stands during his side's 1-0 Serie A defeat to Inter at San Siro.

Koulibaly made a goal-line block to deny Mauro Icardi in the first half but was sent off 10 minutes from time after receiving two yellow cards in quick succession - one for a challenge on Matteo Politano and a second for sarcastically applauding the referee.

Ancelotti claims Napoli asked for the match to be suspended on three occasions due to racist abuse but no such action was taken.

"We asked three times for the match to be suspended and three times they made the announcements [over the public address system]," he told Sky Sport Italia.

"Koulibaly was nervous and the mood at the time was not the best. We asked them to suspend the game three times but it continued.

"We keep being told play can be halted, but when? After four or five announcements?

"Maybe we have to take matters into our own hands next time and stop play ourselves. They'll probably make us lose the game if we walk off, but we are prepared to do it.

"It's not good for Italian football, seeing this."