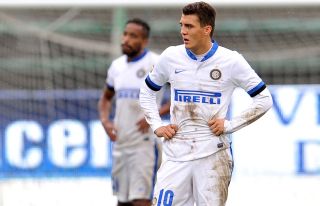 Thohir's takeover from Massimo Moratti was announced last week, and Kovacic would love to get his first goal for the club to help them take three points back to Milan.

Kovacic - a January signing from Dinamo Zagreb - has struggled to cement a place in Inter's first team due to injuries, but insisted he is ready to play a big part under new coach Walter Mazzarri.

"We are here to play and to win, (and) we want to give Thohir his first victory," he told SportMediaset.

"My problem is that I can’t score goals at the moment.

"I must admit I feel the fact I haven’t scored my first goal for Inter yet."

The Croatian has only started two Serie A fixtures this season, but has found himself playing in a more advanced position under Mazzarri compared to previous coach Andrea Stramaccioni.

"I like to play in any of the midfield roles and am at the disposal of the coach," he added.

"With Andrea Stramaccioni I was in a deeper role, whereas Walter Mazzarri wants me in a more advanced position to provide assists and try to score."