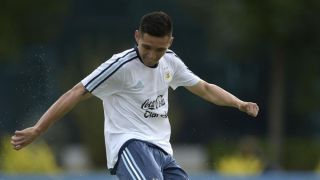 Sevilla have reached an agreement with Atletico Madrid for the loan signing of Argentine midfielder Matias Kranevitter, subject to a medical.

Kranevitter made the switch to La Liga from River Plate in August 2015 before immediately returning to the club on loan.

He switched to Atleti in January and made eight La Liga appearances as they finished third in the league and also reached the Champions League final, where they were beaten on penalties by rivals Real Madrid.

The 23-year-old is now set to continue his development with Sevilla for the 2016-17 campaign, with both clubs confirming an agreement had been reached.

Kranevitter, who was part of the Argentina squad that reached the Copa America final, will undergo a medical on his return to Spain before signing his contract.