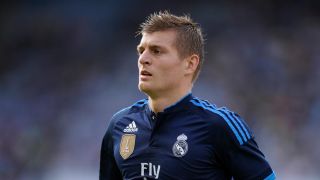 Toni Kroos remains optimistic about Real Madrid's chances of winning La Liga and has warned that the Santiago Bernabeu side should not be written off just yet.

Zinedine Zidane's men sit third in the table with 44 points from 21 games, having fallen four points behind leaders Barcelona following Sunday's 1-1 draw with Betis, while the Catalans also have a game in hand.

Nevertheless, Kroos has spotted improvements since Zidane replaced Rafa Benitez as coach and hopes they can materialise into a title bid.

"We won't give up, that would be stupid," the Germany international told Marca.

"We've still got to play Barca and they could be dropping points at other grounds. Obviously the situation isn't ideal, but things are changing.

"If you look at our last few performances, we're playing a lot better.

"Like I said, the situation in the table isn't ideal, but we have to keep working hard and improving the way we have done in the last three matches.

"We've got to kick on and pick up as many points as possible from here on."