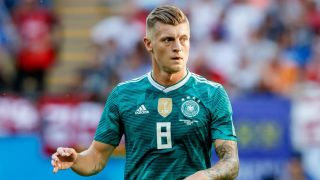 Germany great Lothar Matthaus dubbed Toni Kroos one of the country's "future leaders" and called for the Real Madrid midfielder to stay with the national team after their World Cup disappointment.

Kroos gave Die Mannschaft hope of reaching the knock-out stage with his dramatic late free-kick in a 2-1 Group F victory over Sweden, but he was unable to prevent the subsequent 2-0 defeat to South Korea that sent Germany home from the World Cup at the opening stage for the first time in 80 years.

The 28-year-old midfielder was one of few Germany players to come out of the tournament with much credit and Matthaus warned that the national team could ill afford to lose his services.

"Toni Kroos leaving the German national team would hurt me very much," Matthaus told Bild. "He played an extraordinary season for Real Madrid.

"He can still play on the top level for four more years and improve those around him. Him stepping down would be a real loss.

"For me, he's one of our future leaders."

Matthaus said that Germany coach Joachim Low should address the question of whether his more experienced players are ready for the challenge of restoring the team's pride during qualification for the 2022 World Cup in Qatar.

"Coach Low must have a clear idea regarding the WC 2022," said the 1990 World Cup winner. "He should talk to every older player in the squad about motivation and perspectives.

"He doesn't need to attack those players, it's just an ordinary process because we're Germany, not Panama.

"There are alternatives for each position."