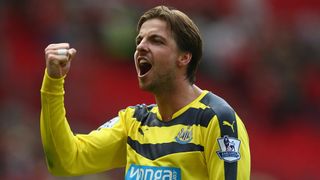 Newcastle United goalkeeper Tim Krul has joined AZ Alkmaar on loan until the end of the season after his stint at Ajax was cut short.

The Netherlands international missed a large part of the 2015-16 season through injury, slipping down the pecking order at St James' Park, and so made a temporary switch to Ajax at the start of this campaign in a bid to regain form and fitness.

However, having failed to feature for the club's first team, Krul has now left the Amsterdam Arena to join fellow Dutch side AZ - and the 28-year-old is hoping to impress in the coming months.

"AZ is a fantastic club," he told the club's website. "They compete for prizes in the league, the cup and in Europe, and  they are doing just fine.

"When they called, I could hardly say no. They have put so much confidence in me that I decided to come.

"I have been fit for a while, but have been unable to really show it yet. I hope to regain my former level."

I'm grateful to for giving me the opportunity! Can't wait to be on the pitch! January 31, 2017

Krul has made almost 200 appearances for Newcastle, having debuted as an 18-year-old in 2006.