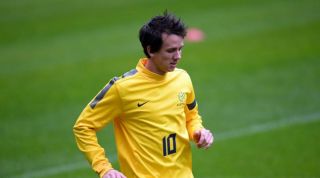 Western Sydney reached the final - to be played over two legs against Al Hilal in October and November - as a result of their win.

Juric came off the bench in Australia's friendlies against Belgium and Saudi Arabia in September, but his spot has been taken by Bayer Leverkusen forward Kruse in the squad for clashes in Abu Dhabi and Doha.

The 25-year-old Kruse - regarded as one of Australia's best attacking talents - has not played a competitive match since seriously injuring his knee in December.

"Tomi's picked up an injury and I thought it better that he stay in Australia to receive treatment with his club to ensure he recovers as soon as possible," Socceroos coach Ange Postecoglou said.

"It is important he gets back on the field to give him the best opportunity to be fit and in form for the [AFC] Asian Cup.

"He [Kruse] has been coming along really well at Bayer Leverkusen and it will be good to get him into the squad and get him involved in the games against UAE and Qatar."

Kruse has been on the bench in four of Leverkusen's matches this season, including their UEFA Champions League win over Benfica on Wednesday.

He twinged his knee in training with the Socceroos in September after winning selection in Postecoglou's squad for the Belgium and Saudi Arabia matches.

Kruse - named Australia's international player of the year in 2013 - has won 28 caps for his country, scoring three goals.

Australia's squad will link up on Sunday in Abu Dhabi.