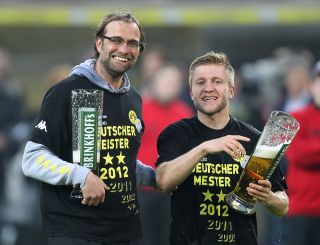 The popular German boss replaced Brendan Rodgers in October and has already had a positive impact on the Anfield outfit, who have only lost one of his 10 games in charge, winning six of the last seven in all competitions.

Polish international Blaszczykowski spent seven years under Klopp’s stewardship at Signal Iduna Park, winning a couple of Bundesliga titles and one German Cup as well as reaching the 2013 Champions League Final at Wembley.

And the 29-year-old, currently on a season-long loan at Fiorentina, believes the Reds ‘have already won’ by bringing in the charismatic coach.

“He was, he is, and he always will be a special guy,” he says, speaking exclusively in the January 2016 issue of FourFourTwo. “He’s changed me, not only as a footballer but as a human being.

“No one had more influence than Klopp on who I became as a player. I owe him a lot. He always taught me that in all this craziness and competition, there is also a human side inside all of us that we need to cherish. Liverpool couldn’t have hired a better manager. They have already won by appointing him.

“He’s not only a great coach; he’s a great psychologist and a great man. He made decisions based on what he sees, not what other people are telling him. That’s extremely important, because he is honest with people and we could sense that. He knows how to deal with different characters and different egos.”

And the wideman, who has made more than 250 outings for die Schwarzgelben since signing from Wislaw Krakow in 2007, is sure Klopp will succeed in the Premier League as long as the players embrace his methods.

“I’m pretty sure he will [succeed], but only if the players buy into his philosophy,” he says. “That’s what we did at Borussia and it paid off. They just need to trust him. He knows what he’s doing, on and off the field. We had to work and make a lot of sacrifices, but we accomplished a lot with Dortmund.”

Read the full interview with Jakob Blaszczykowski in the January 2016 issue of FourFourTwo magazine, available in print, on iPad and on iPhone now. A South American special, we go access all areas to find out what makes Boca Juniors one of the most iconic clubs in the world, rate the continent’s fiercest rivalries and go One-on-One with Hernan Crespo. Plus, we hail goalscoring goalkeepers from Rogerio Ceni to Jose Luis Chilavert via Sebastian Saja and Johnny Vegas Fernandez (yes, really), learn what’s it like playing at altitude, meet Chile’s Deportivo Palestine, who give hope to fans suffering 9,000 miles away, and recall life under Pablo Escobar’s rule for Atletico Nacional. Grab your copy today or subscribe!