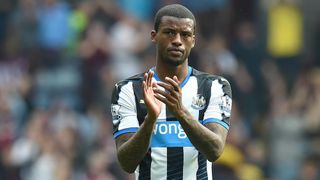 Former Liverpool attacker Dirk Kuyt believes Georginio Wijnaldum would be a great signing amid reports the Newcastle United star is set to complete his transfer to Anfield.

Wijnaldum impressed at Newcastle in 2015-16 following his move from PSV, but could not prevent them from dropping to the Championship.

The Netherlands international, 25, looks set to return to the Premier League, though, and Kuyt has backed his compatriot to make an instant impact at Liverpool.

"It's a great move for Gini. Liverpool are on the way up again under Jurgen Klopp. It's great for Gini that Klopp believes in him," Kuyt told De Telegraaf.

"Liverpool were already discussing him during my time at the club. Liverpool scouts already had him down as a big talent during his early years at Feyenoord. When I played at Liverpool, they already said that he would be a great signing one day.

"He eventually makes it to Liverpool via PSV and Newcastle. He has arrived at a top club in England now and that's where he belongs.

"I know him really well and played alongside him at the 2014 World Cup. He is not just a great player, but has a lot of energy as well."