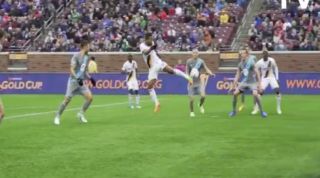 Giovani dos Santos opened the scoring with a beautiful 38th-minute goal in LA Galaxy's 2-1 win over Minnesota United at the Bobby Dodd Stadium.

Former Marseille winger Romain Alessandrini dinked a lovely ball into the box using the outside of his foot, which dropped into the path of Mexico international Dos Santos.

With just one touch – also with the outside of a boot – ex-Ipswich loanee (yes, that happened) Dos Santos neatly lobbed the ball over goalkeeper Bobby Shuttleworth to complete a fine goal for the Galaxy. It was his fourth of the season, and third in LA's last three matches.

Minnesota forward Christian Ramirez went from hero to villain in the 84th minute, scoring a decisive own goal having hauled his side level only 18 minutes earlier.