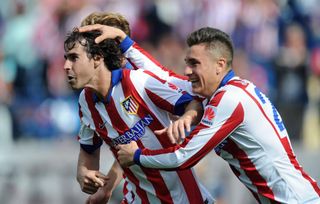 All eyes were on Diego Simeone's men after they stumbled to a 3-1 defeat against Valencia prior to the international break.

Atleti subsequently entered the game in fifth position and eight points behind Barca with a game in hand.

Yet they were able to grab a crucial success versus an Espanyol side who were unbeaten in their last four games thanks to Tiago and Suarez.

The duo's efforts lifted the Spanish champions to fourth, while their opponents dropped to 11th.

Salva Sevilla started in place of Victor Sanchez in the sole Espanyol change following the 2-0 triumph over Real Sociedad last time out.

Atletico almost took the lead in just the second minute, Tiago flicking on Gabi's corner to the back post - where Arda Turan unleashed a powerful volley that forced Kiko Casilla into a stunning reactionary save.

Casilla was then forced to turn Koke's low strike around the post.

Atleti were particularly dangerous from set-pieces, illustrated by Tiago forcing Casilla into another save from Gabi's corner.

But Casilla could do little as Tiago opened the scoring after 43 minutes, looping a header into the far corner from Gabi's superb cross.

Atleti flew out of the blocks at the start of the second period, although their attacks were lacking the desired ingenuity.

Espanyol grew into the half and, scenting an opportunity, pressed forward in search of a leveller.

That left them susceptible to the counter-attack, epitomised by Mario Mandzukic forcing a good stop from Casilla as Atletico quickly transitioned from defence to attack.

But it was their excellence from set-pieces that brought the crucial second goal with 19 minutes left.

Diego Godin rose highest to meet Koke's corner, his header finding Raul Jimenez - who then nodded back across goal for Suarez to tap into an empty net when the ball already seemed destined to cross the line.

That seemed to take the wind out of Espanyol's sails, with the hosts almost adding a third when Griezmann rattled the outside of the post from a tight angle having rounded Casilla.

This miss mattered little, however, as Atleti saw out the rest of the game to take the spoils.