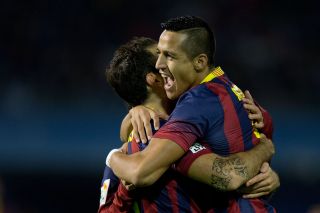 Leaders Barca opened up a four-point lead ahead of Atletico Madrid as Gerardo Martino's men followed up their 2-1 success against bitter rivals Real Madrid in the first Clasico of the season last Saturday with a routine victory.

Celta are still searching for their first home win of the season as, despite a spirited performance, they were outgunned by a Barca side in rampant form at Estadio Municipal de Balaidos.

Alexis opened the scoring inside the first 10 minutes, the Chile international scoring from close range after Gustavo Cabral had been dispossessed in midfield.

The hosts contributed much to an open encounter, but Martino's side took command early in the second half as goalkeeper Yoel unfortunately turned a Cesc Fabregas strike into his own net following neat work from Lionel Messi and Alex Song.

And it was former Arsenal man Fabregas who rounded things off with a well-placed drive to maintain Barca's unbeaten start to the campaign.

Captain Carles Puyol came into the side for Barca due to Gerard Pique's hamstring injury, while Clasico goalscorer Neymar, Andres Iniesta, Xavi and Javier Mascherano were all left on the bench as part of five changes by Martino.

Celta, by contrast, made only one change from the side that beat Malaga 5-0, Brazilian midfielder Rafinha replacing Santiago Mina.

Barca needed just nine minutes to break the deadlock as Alexis tapped in the rebound after Fabregas' shot had been well saved by Yoel following poor work from Cabral.

Both sides began to create chances as the play became more stretched, Messi curling wide at the end of a free-flowing Barca move, before Rafinha fired just past the post for Celta.

Celta enjoyed a good spell of pressure midway through the first half, and they were denied a leveller after 31 minutes as on-loan Barca forward Nolito's strike was ruled out after striker Charles was adjudged to have impeded Victor Valdes.

The visitors made an enforced change seconds later, left-back Adriano limping off and replaced by Martin Montoya.

Celta had shown great ambition in the first half, but their task was made even harder three minutes into the second period as Fabregas' curling effort crashed off the bar before deflecting off Yoel and into the net.

And Barca all but ended the game as a contest six minutes later, Fabregas converting emphatically after at the near post after being played in by Messi.

Former Barca star Luis Enrique's side continued to search for a way back into the contest, and they were almost rewarded for their enterprise when Nolito's free-kick cannoned off the crossbar.

Pedro then clipped the bar before Yoel prevented Messi from netting a fine individual goal in the closing stages, but Celta were left to rue their missed opportunities as Barca underlined their title credentials once more.