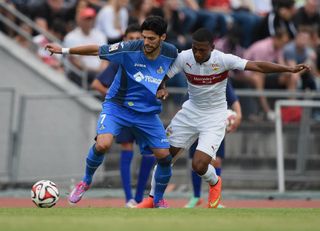 The visitors recorded their second away win on the bounce and it was Lafita's strike that proved crucial versus the side he represented between 2007 and 2009.

Fredy Hinestroza's excellent run and cross left Lafita with a simple finish to put Getafe 2-0 up early in the second half, with Depor goalkeeper Fabricio's own goal having broken the deadlock 10 minutes before the break.

Helder Postiga reduced the deficit in the 80th minute with a cool finish from inside the box, but there was no way back for Victor Fernandez's men.

Getafe climb into the top half, while Depor remain uncomfortably close to the bottom three.

Fabricio's moment of misfortune arrived when Abdoul Karim Yoda cut in from the right and fired a shot against the base of the post, with the ball rebounding off the prone keeper and into the net.

Lafita turned home Hinestroza's delivery in the 46th minute to put Getafe in control in, with a late side-footed finish from Postiga setting up a tense finish which saw the visitors hold on for the points.