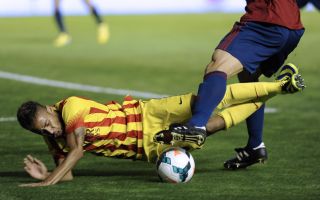 The champions’ form going into the match was remarkable, having won 13 consecutive league matches, but they failed to make the most of their chances in Pamplona.

Cesc Fabregas squandered numerous opportunities and even Lionel Messi could not inspire them to victory after coming off the bench, with the stalemate bringing an end to Barcelona’s record of scoring in 64 league matches in a row.

The hosts ran out 1-0 winners at Malaga before the international break and coach Javi Gracia named a very similar team, with Roberto Torres replacing Emiliano Armenteros as the only alteration.

Gerardo Martino made five changes to his team from the win over Real Valladolid as Carles Puyol made his first league start since March, but Messi had to contend with a place on the bench following a hamstring injury.

In the first quarter of the match chances were a novelty as Barcelona dominated possession, but struggled to break through the resolute Osasuna defence.

Fabregas felt he was entitled to a penalty just after the half-hour mark as he claimed to have been pushed, but in the end the midfielder received a yellow card for attempting to knock Martin Montoya’s cross into the goal with his hand.

In the 39th minute, Pedro pounced on Andres Fernandez’s punched clearance and fired a half-volley towards goal, but Alejandro Arribas made a vital block to keep the score level.

Moments before the break, Marc Bartra broke away from Arribas and managed to connect with an out-swinging corner, but could not keep his header from flying off-target.

Barcelona’s troubles continued for the first 10 minutes of the second period, but as the hour mark approached they created two excellent chances in quick succession.

Montoya burst into the right-hand side of the area and slid a pass to the back post, but Neymar was not able to get on the end of it.

Fabregas then had an even better opportunity, but with just Fernandez to beat he attempted a lob which went horribly wrong and landed straight in the goalkeeper’s gloves.

It was proving to be a bad day in front of goal for Fabregas who was put through on goal again soon after, but this time he blazed well over.

With just over 20 minutes left Martino introduced Messi from the bench, but aside from one opportunity in which he was outmuscled by Arribas in the six-yard box, the Argentine was quiet and could not carry Barca to a win.