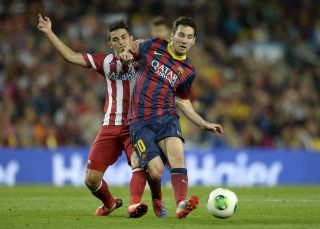 The duo are currently level on points at the summit of the Spanish top flight - Barca leading the way on goal difference - and are yet to meet in the league this season.

They did, however, contest the Supercopa de Espana  in August, with Barcelona emerging as champions on away goals after a 1-1 draw at the Vicente Calderon was followed by a goalless affair at Camp Nou.

Atletico have won just one of the last eight league clashes between the sides, scoring just eight goals compared to Barca's 24.

Barcelona could be boosted by the league return of Lionel Messi, who scored twice after coming on as a second-half substitute in Wednesday's 4-0 Copa del Rey win over Getafe following a two-month spell on the sidelines with a hamstring injury.

Real Madrid will be keen spectators of Saturday's clash at the Vicente Calderon as they prepare to visit Espanyol in the weekend's other Madrid-Barcelona clash on Sunday.

Carlo Ancelotti's men currently sit five points adrift of the leading pair, but are on an eight-match unbeaten run in the league.

Having conceded 21 goals without reply in seven fixtures between the sides from February 2009 to March 2012, Espanyol held Real to draws in both of their meetings last season.

In the chase for European berths, Athletic Bilbao will be looking to bounce back from a 2-0 defeat to near rivals Real Sociedad as they host Almeria, while Sociedad have five consecutive victories behind them as they head to sixth-placed Villarreal on Monday.

Basement club Real Betis' fight for survival continues as they welcome Osasuna to Benito Villamarin, and the club will be looking for a first win in 12 La Liga fixtures.

Fellow strugglers Celta Vigo and Rayo Vallecano face a tricky home clash against Valencia and a trip to Getafe respectively.

Elsewhere, Sevilla will aim to climb into the top six with victory at Elche on Saturday, Real Valladolid will be hoping to keep out of the bottom three as they prepare for the visit of Granada on Friday and Malaga meet Levante in a mid-table clash on Sunday.