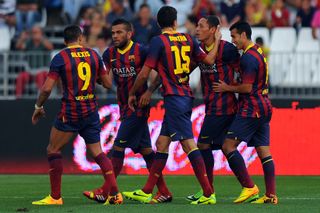 The reigning champions have taken 21 points from their seven La Liga games, but will be without star attacker Messi - who has already scored eight league goals this term - due to a hamstring injury.

Gerardo Martino's men proved they can perform without their talisman in Tuesday's UEFA Champions League win at Celtic though, and they will look to do so again by extending their unbeaten home run to 25 Liga matches against a Valladolid side without a win in four.

Atletico Madrid sit level on points with Barcelona at the top thanks to their own 100 per cent start to the campaign, and they will be out to build on their 1-0 success over city rivals Real Madrid last time out when they host Celta Vigo on Sunday.

Striker Diego Costa scored the only goal of the game as Diego Simeone's men secured their first league win over Real in 14 years, which they duly followed up with a 2-1 Champions League success at Porto.

Atletico did the double over Celta last term, and the onus is likely to be on Costa - joint top scorer in the division with Messi - to add to his tally and fire them to an eighth straight victory.

Real sit five points adrift of the leading pair following that setback against Atletico, but they will be heavy favourites to get back on track with a win at Levante on Saturday.

Joaquin Caparros's side are unbeaten since their 7-0 hammering at the hands of Barcelona on the opening day, but they have not won in the league at Estadio Ciudad de Valencia since March.

And Real - who stormed to a 4-0 win over Copenhagen in the Champions League on Wednesday - will be confident of atoning for their derby defeat.

Valencia will be gunning for their fourth consecutive win when they face Athletic Bilbao, while Villarreal can bounce back from their loss to Real Betis against Granada on Friday.

Elche host Espanyol hoping to move up the table following their first win of the campaign over Celta, and two out-of-form sides meet when Real Sociedad take on Rayo Vallecano.