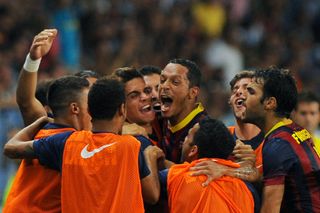 The reigning champions have started the new campaign with two wins from two games thanks to their 7-0 drubbing of Levante and a 1-0 success over Malaga.

But their season continues with a tricky test at Mestalla against Miroslav Dukic's side.

Martino is boosted by the return to fitness of Argentina international Lionel Messi after his star player's recent trouble with a thigh injury.

The 26-year-old did not feature in the victory over Malaga, but started in Wednesday's Supercopa de Espana second leg against Atletico Madrid, missing an 89th-minute penalty as Barca won on away goals.

Valencia harbour ambitions of breaking back into the UEFA Champions League places after finishing fifth in 2012-13, but they have had a mixed start.

Dukic's men began with a solid 1-0 triumph over Malaga through Ricardo Costa's second-half strike, but were well beaten in a 3-1 loss away to Espanyol last time out.

They came from behind to beat Real Betis 2-1 in the Italian's first game in charge, and followed that by beating Granada 1-0 thanks to a Karim Benzema effort.

Midfielder Mesut Ozil is delighted with the club's winning start, but conceded their performances must get better if they are to regain the La Liga title from Barcelona.

"We are happy we have won both games (and taken) six points," he said.

"We know we have to play better football. There's still room for improvement and we will do that in the future."

Sociedad booked their place in the Champions League group stages with a 4-0 aggregate win over Lyon, sealed courtesy of a 2-0 victory in the second leg on Wednesday night thanks to a Carlos Vela brace.

Diego Simeone's Atletico sit second in the table following a 3-1 success away to Sevilla and a 5-0 rout of Rayo Vallecano last Sunday.

Elsewhere on Saturday, Espanyol and Sevilla have home fixtures against Real Betis and Malaga respectively, with the two away sides yet to register a point this season.

Osasuna prop up the table, and will look for their first points of the campaign when they welcome Villarreal to the Estadio El Sadar. Jose Luis Medilibar's team have been on the wrong end of defeats to Granada and Athletic Bilbao in their opening matches.

Real Valladolid are also winless, and will look to buck that trend when they host Getafe, while Celta Vigo and Granada go head-to-head at the Estadio de Balaidos.