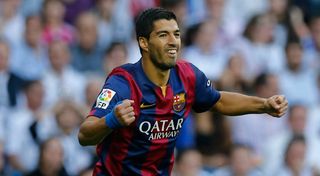 The Uruguayan - initially suspended from being presented to Barcelona fans at the venue as part of the conditions of his four-month ban for biting Italy's Giorgio Chiellini at the World Cup - later had his ban relaxed.

That allowed him to be eventually presented to the club's fans following his reported €94million switch from Liverpool, while he was also permitted to be involved in friendlies at Camp Nou - something he did in a 6-0 win over Mexican side Club Leon in August.

That gave Suarez the chance to taste life at Camp Nou in a Barcelona shirt and should hold him in good stead for his competitive home debut on Saturday.

Suarez made his first appearance for the Catalan giants in last week's 3-1 Clasico defeat to Real Madrid and created the early opener for Neymar, but a debut goal eluded him.

Head coach Luis Enrique has made a promising start to life at the Catalan giants since leaving Celta in the close-season, after one year at Estadio de Balaidos.

Defeat in the Clasico was Barca's first loss of the campaign and also saw them concede their first goals of the season, however they remain top of La Liga on goal difference from Sevilla.

Celta opted for Eduardo Berizzo as the man to replace Luis Enrique, and the Argentine has begun well with only one defeat in their nine games.

Last weekend's 3-0 victory over Levante saw them climb into sixth place in the table, with Joaquin Larrivey taking his tally to six goals for the season.

His partnership with Nolito has been crucial for Celta and between them they have struck 11 of the club's 16 league goals.

Despite their good form, defender Jonny expects the hardest test of the season so far and said they will not be thinking about their former coach.

"It will be toughest match we play so far this season," said the 20-year-old.

"It's probably made even more difficult by the fact they'll be motivated after the loss against Real Madrid, but it doesn't mean a great deal as there is never a good time to play against Barcelona. We have to maintain ultimate concentration and play together because they have players who can harm you at any time.

"They're undoubtedly a great team with amazing players, but we're in good form at the moment and despite the quality of opponent, we still have hopes of obtaining a good result.

"We won't be thinking about Luis Enrique when we go to Camp Nou, as it's been hinted at in the media. We are going there with the hopes of getting a good result, nothing more."

Celta have not won at the Camp Nou in their previous 15 league visits, and have conceded three on each of the last three trips. Barca won both matches 3-0 last season.

Adriano (hamstring) and Douglas (foot) are both out for Barca, while the visitors will be without Andreu Fontas (knee), Augusto Fernandez (calf) and Borja Oubina (knee).