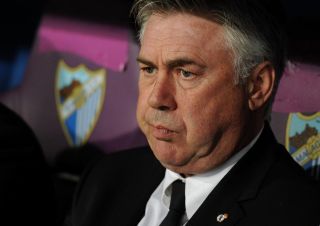 Sunday's game at the Bernabeu attracted its usual global attention, and did not disappoint as Lionel Messi's hat-trick helped Barca twice come from behind to seal a thrilling 4-3 win over fierce rivals Real.

That result, combined with Atletico's 2-0 win at bottom club Real Betis, means the top three are now separated by just one point, with the two Madrid clubs level at the top on 70 points with nine games remaining and Atletico leading only by virtue of their head-to-head record.

After seeing their 18-match unbeaten league run come to an end on Sunday, Carlo Ancelotti's Real face the toughest task of the trio in the midweek round of action.

They visit Sevilla, who come into the game in sparkling form after five consecutive Liga wins, while they were further buoyed last Thursday after seeing off bitter rivals Betis on penalties in the last 16 of the UEFA Europa League.

Any slip-up by Real is likely to be punished by both their rivals, who host mid-table outfits.

Atletico welcome 11th-placed Granada to the Vicente Calderon, which has become a fortress for Diego Simeone's men this season.

In 15 home league games, they have picked up 12 wins and three draws, with only Real, Barca and Sevilla having anything to show for their visits to their ground.

Granada, by contrast, have been in torrid form on the road, picking up just one point from their previous six away outings.

Barca, meanwhile, see a familiar face visit the Camp Nou as club icon Luis Enrique arrives with his Celta Vigo side hoping to stop a Barca team who have scored 17 goals in their last three home Liga fixtures.

At the wrong end of the table, Betis desperately need to start picking up points to stand any chance of staying up - starting with their trip to Levante - while fellow strugglers Almeria entertain eighth-placed Valencia.

Athletic Bilbao currently occupy the fourth and final UEFA Champions League spot, and they will hope to keep the challenging trio of Real Sociedad, Villarreal and Sevilla at arm's length when they visit Elche in 15th.

Sociedad will be confident of maximum points at home to 18th-placed Real Valladolid - who have won just once in their last eight league games, albeit with that victory coming against champions Barca - while Villarreal visit another side struggling at the wrong end of the table in Getafe.