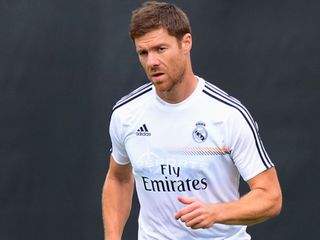 Alonso made his first appearance of the season as a substitute in Wednesday's 7-3 triumph over Sevilla, following a five-month lay-off with groin and foot injuries, and could return to the starting line-up when Madrid face Rayo Vallecano on Saturday.

Illarramendi has deputised in the absence of the Spain international, but acknowledges Real are a better team with Alonso fit.

"He is important for us; he has been here for a long time and has always been important," said Illarramendi.

"There will be more competition and that is good for the team and helps us all to improve. We have a match every three days and we will have to rotate to get rest.

"The important thing is carry on as we are whoever plays."

Cristiano Ronaldo passed another milestone with his hat-trick against Sevilla - moving past Ferenc Puskas in the list of league goalscorers for Madrid.

The Portugal international has scored five times in four previous games against Vallecano, including a hat-trick in 2011, and has 11 goals in as many league starts this season.

Victory over Sevilla saw Madrid move back to within six points of leaders Barcelona.

However, Rayo dropped into the bottom three as a result of their defeat to fellow strugglers Osasuna.

The sides have met 20 times in all competitions, with Rayo not tasting victory in the league since 1997.

Their problems are illustrated by the fact top-scorer Alberto Bueno has only managed two league goals, both coming on the opening weekend of the season.

Only Granada have mustered a lower tally than Rayo's eight and Paco Jemez's side have also conceded 27, more than anyone in the division.