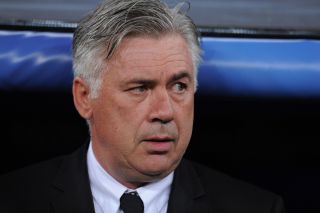 Carlo Ancelotti's men came unstuck in a 2-1 defeat to Barcelona at Camp Nou on Saturday, with goals from Alexis Sanchez and Neymar giving the Liga champions a two-goal cushion before Jese Rodriguez notched a consolation in injury time.

Real were incensed after the game as they felt they should have had two penalties, one for a handball by Adriano and another for a push on Cristiano Ronaldo by Javier Mascherano.

But those protests were waved away by referee Alberto Undiano, and Real's run of four straight victories in all competitions came to an end.

The result leaves Ancelotti's side six points adrift of league leaders Barcelona, while they are also five behind city rivals Atletico Madrid.

Real will feel confident of getting back on track against Sevilla though, as they have beaten Unai Emery's charges in eight of their last nine meetings in all competitions.

Xabi Alonso once again trained with Real's first team on Sunday as he continues his comeback from groin and foot injuries but is unlikely to play against Sevilla, while centre-back Raphael Varane (knee) is a doubt.

Sevilla have recovered from a slow start to their campaign that saw them go five matches without a victory in La Liga, and are now unbeaten in seven in all competitions.

That run includes a sequence of five league fixtures without defeat, including Sunday's 2-1 success over Osasuna that left them in 10th position with 13 points.

Emery will be without on-loan Chelsea winger Marko Marin, who remains sidelined with a hamstring injury, while midfielder Ivan Rakitic will hope to feature despite problems with his groin and hip.