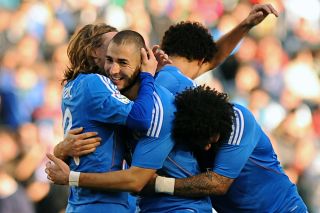 The visitors' start to 2014 was unblemished coming into this match after winning all four of their matches in all competitions without conceding a single goal and Betis rarely threatened that record.

A wonderful early strike from Cristiano Ronaldo took the Ballon d'Or winner's tally for the season to 31 goals and the Madrid club did not have to wait long for a second as Gareth Bale buried a free-kick in the 25th minute.

Benzema ensured the first half ended in even more despair for Betis, converting after good play by Luka Modric and a fourth arrived just after the hour mark when Angel Di Maria produced a sublime finish from distance.

Substitute Alvaro Morata added a fifth late on as rampant Madrid extended their unbeaten run to 17 matches in all competitions to haul themselves level with Barcelona and Atletico Madrid at the top of La Liga.

Osasuna were Betis' conquerors in their previous league outing last weekend and coach Juan Carlos Garrido made four alterations to that team, while Alvaro Vadillo and Joan Verdu were deemed fit enough to take places on the bench.

Madrid coach Carlo Ancelotti named the same side that picked up a routine 1-0 win at Espanyol on Sunday.

The visitors may have been met by raucous atmosphere in Seville, but Ronaldo silenced the home support in the 10th minute as he hit an unstoppable screamer into the top-right corner of the goal from 30 yards out.

Betis' attacking threat was non-existent and Madrid capitalised by doubling their lead 25 minutes in. Antonio Amaya fouled Bale after cutting in from the right and the world's most expensive player fired the resulting free-kick in past the static Stephan Andersen.

The hosts could have pulled one back just before the break had Ruben Castro connected with Leo Baptistao's right-wing cross, but Betis ultimately went in at half-time trailing by three goals as Benzema fired into the bottom-left corner after a clever cutback by Luka Modric.

Ronaldo spurned a glorious chance seven minutes into the second period as he collected Benzema's throughball and shot from just inside the area, but Andersen tipped it wide of his right-hand post.

Madrid's fourth did arrive eventually, however. The hosts seemingly cleared Modric's 62nd-minute corner, but Di Maria pounced on the loose ball and hammered a rasping half-volley into the bottom-right corner about 35 yards from goal.

Morata notched his side's fifth in stoppage time as he controlled a wayward overhead-kick attempt by Ronaldo before poking in, helping Madrid keep pace with Atletico and Barca, while Ancelotti's men picked up their fifth consecutive clean sheet in all competitions.