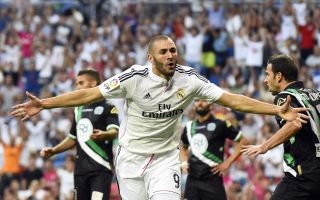 Carlo Ancelotti handed league debuts to big-money signings Toni Kroos and James Rodriguez and it was Germany midfielder Kroos who provided the assist for Benzema to score the opening goal at Santiago Bernabeu.

The France international rose highest to meet the former Bayern Munich man's corner from the right to give the European champions a slender half-time lead.

Ancelotti's front six showed they are a work in progress as Cordoba gave a good account of themselves on their return to the top flight, but the prolific Ronaldo sealed the points right at the death with a long-range strike.

While Albert Ferrer's men started brightly after the break, they lacked the quality to draw level as Real held out to secure all three points after losing to city rivals Atletico Madrid in the Supercopa de Espana.

Ancelotti, who did not name Angel Di Maria on the bench with the winger reportedly on the verge of joining Manchester United, will expect his new-look side to improve on this display as they once again seek to challenge Atleti and Barcelona for the title.

Real started on the front foot and Gareth Bale flashed a free-kick over the crossbar two minutes in, then Ronaldo saw his penalty appeals waved away having claimed a nudge in the back from Jose Crespo.

One of Cordoba's close-season signings, Mike Havenaar, tried his luck but his shot failed to trouble Iker Casillas - who started in goal ahead of new boy Keylor Navas after being largely overlooked by Ancelotti for league matches last season.

Juan Carlos was then called into action at the other end as Ronaldo's shot deflected awkwardly towards goal before the Cordoba goalkeeper captured it at the second attempt.

Kroos was next to threaten Cordoba's goal with a strike from distance before Benzema opened the scoring with a powerful header just before the half-hour mark.

The former Lyon man agreed a new long-term contract extension earlier this month and proved his worth by crashing in a header off the post from Kroos' corner.

Cordoba showed a positive response to going behind as they started the second half the brightly, threatening Real's backline with some dangerous crosses.

Sergio Ramos denied Havenaar a clean header on target before Ryder Matos' long-range strike forced a save from Casillas in a positive period for Ferrer's men.

Rodriguez's fizzed effort was palmed away by Juan Carlos just before the hour before Xisco gave Real a scare - prodding the ball home from close range only to be adjudged offside.

Isco and Sami Khedira, whose future has also been the subject of much speculation, replaced Rodriguez and Benzema with 20 minutes remaining and Ronaldo made sure of the points after having a goal disallowed for offside.

The Portugal forward added a touch of gloss to the result with a long-range strike late on, having cut in from the left before beating Juan Carlos with a low drive.