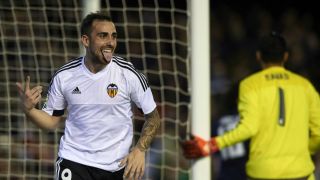 Rafael Benitez was denied a winning return to the Mestalla on Sunday as Real Madrid were held 2-2 by Valencia while Villarreal left it late to beat Deportivo la Coruna 2-1.

Benitez has come under pressure after a mixed season in Madrid but was afforded a generous welcome at a club he helped to two La Liga titles.

Madrid led 16 minutes in when Karim Benzema swept home after a slick move involving Cristiano Ronaldo and Gareth Bale only for Dani Parejo to level from the spot before half-time.

After Mateo Kovacic was dismissed for a lunge on Andre Gomes shortly after the hour, Bale thought he had snatched the points when he headed in Toni Kroos' cross but Paco Alcacer was Valencia's hero - earning Gary Neville's side a deserved point seven minutes from time.

Madrid's third consecutive winless game on the road allowed Villarreal to move within a point as Bruno's brace downed Deportivo.

The Spaniard's opener was cancelled out by Luis Alberto shortly after the break but his penalty in the final minute extended Villarreal's winning run in La Liga to five matches.

Their success at the Riazor allowed Athletic Bilbao to move up to sixth thanks to their 2-2 draw with Las Palmas.

The hosts will perhaps feel unfortunate not to have claimed all three points, having twice led through Aritz Aduriz and Inaki Williams but Las Palmas gained a valuable point thanks to goals from Vicente Gomez and Tana.

Eibar picked up their first away league win since October with a thumping 4-0 victory at Real Betis - Ander Capa opening the scoring after just three minutes before Keko, Adrian and Borja Baston completed the rout.

Pepe Mel suggested he would resign after their winless run was extended to six but Betis remain above Real Sociedad who could only hold lowly Rayo Vallecano 2-2 in Madrid.

After a run of five straight defeats - including a 10-2 hammering by Real Madrid - the hosts saw goals from Diego Llorente and Jozabed cancelled out by Aritz Elustondo and Bruma - the latter following up his strike at the Bernabeu from Wednesday.

Sevilla's mini-revival came to a halt at Granada as first-half goals from Isaac Success and Adalberto Penaranda helped ensure a 2-1 win at Estadio Nuevo Los Carmenes.

Vitolo pulled one back for the visitors early in the second half but Unai Emery's men failed to claim a point - seeing Adil Rami earn a second yellow card a minute from time.