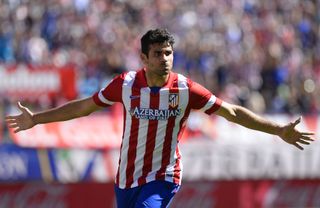 Costa took his tally into double figures for the season with goals either side of half-time, finding the net for the fifth game in a row as Atletico made it eight wins out of eight to join Barcelona at the top of the table, five points clear of rivals Real Madrid.

Nolito pulled a goal back for the visitors in the 71st minute but they could not find an equaliser as their winless run extended to six matches.

Getafe won for a third successive match as they prevailed 3-1 at home to Real Betis.

Pedro Leon struck on 16 and 23 minutes to put Getafe in control and Adrian Colunga soon added a third to seemingly put the game beyond the visitors.

An own goal from Rafa reduced the arrears six minutes into the second half but Getafe held on to their two-goal advantage and climbed to fifth in the table.

They climbed above both Athletic Club and Valencia, who shared a 1-1 draw in Bilbao.

Ever Banega's penalty gave Valencia the lead two minutes before half-time, but the hosts earned a share of the points through Mikel Rico's 76th-minute strike.

Elsewhere, winless Almeria's troubles continued as they were beaten 2-1 away at Sevilla.

Kevin Gameiro gave the home side the perfect start with a goal in the sixth minute, before Rodri levelled the scores midway through the first half.

That looked to have given Almeria just their fourth point of the season but Ivan Rakitic struck a dramatic winner in the third minute of stoppage time to leave the visitors as the only side in the division still awaiting their first win.